If you’re tired of Sadie stories, read no further! But if you can take another one, then scroll on down for a picture and more stories.

Here she is, home in the kitchen, waiting for her liver. You can see the jaundice in her ear skin and where she’s been shaved on her neck. Usually her skin is lovely and pink. All the shave marks are from the IV’s she’s had in. She has shaved spots on her back legs too. If you look closely, you can see track marks on her legs from the IV needles. 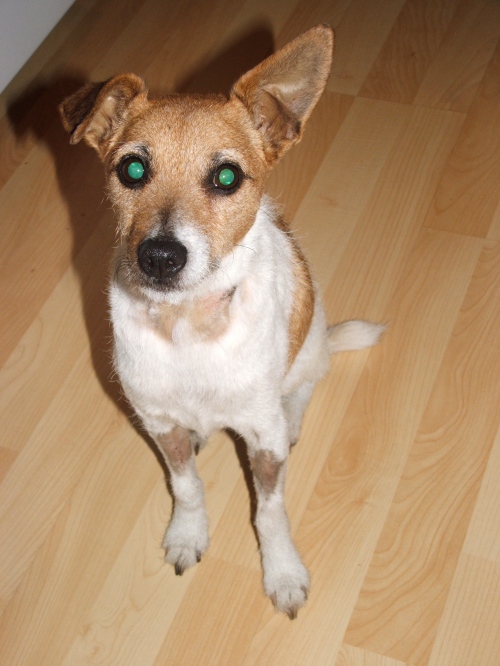 If you didn’t know her, you wouldn’t know she’s been sick. I know because she’s a little shakier than usual, because she gets tired easily, and because sometimes I can tell she has a little bit of an upset stomach (though she hasn’t vomited now since Monday morning), but otherwise she looks good. She greets visitors with enthusiasm, sniffs all the “mail” left by other dogs on our little walks, and just seems cheerier all around.

I wrote a piece I called “Temper Tantrum” on the Wednesday after she initially ended up in the ER (on Saturday night two and a half weeks ago). I didn’t publish it because I didn’t dare to, because I was afraid if I did, the gods would laugh at me for my presumption that Sadie’s survival would be a miracle, and would cut the cord to her life right away. I lived in terror that that one little battle towards life would be her last. In the two weeks since then, she’s fought her way back from an overdose so huge that her survival till now is a miracle in itself. The vet still shakes his head. “She’s alive. Alive.” And every day she is better. Every day a little stronger. She eats and has gained weight, I’m sure of it, though she’s still ribby and knobby.

Dale: Your om manis went straight to her, I think. And all the prayers and good wishes that have spread through space and time from readers who have followed her journey, Stella, Elsie, Pascale, Diana, Loren, Sarala. Thank you all.

Today, on the first of my two or three daily visits to the vet hospital, Sadie launched herself at the kennel front, flung herself into my arms, and tried to climb on top of my head in her desperation to get home. But she’s still not eating, and she’s still vomiting despite the high doses of anti-nauseau medication she’s on. She needs to stay on IV fluids in the hospital. I held her for a half hour or so and tried to tempt her with delicacies. She turned away, gagging, when I held the food to her nose. When it came time to leave, I put her back in the kennel. She grabbed my sweater sleeve with her teeth and wrapped her front paws around my arm, clinging on desperately. I apologized and put her back in the kennel. She grabbed my sweater again, shoving her body into the kennel door. I disentangled her and left with promises to return. When I leave home, I always tell her, “I’ll be back.” I wondered if she understands. When I returned later, I discovered she’d thrown a royal temper tantrum after I left. She ripped the IV out of her leg, and tried to demolish the kennel. Luckily it’s metal. She was wearing a cone and looking mutinous when I saw her. I held her for another 45 minutes, trying to tempt her with more delicacies, again with no luck. For a while she slept on my lap, exhausted, still shaking constantly. Then she stood suddenly and began to pant frantically, lunging towards the floor. I caught her before she ripped the catheter out again, and tried to calm her, unsure of why she was so frantic. I thought of taking her outside and was in the process of putting a leash on when she flooded me. She’d needed the bathroom, didn’t know how to tell me, and now stared at me with anguish.

When I put her in the kennel, she turned her back on me and glared at me over her shoulder. If you’ve ever seen Shrek, you’ll know how expressive Donkey is. Well, Sadie is Donkey. His expressions are her expressions. She can be irritatingly over the top in her enthusiasm, but she’s all heart and love and forgiveness. (I hope she’ll forgive me. I cry every time I walk out of the vet hospital, knowing that my little lap dog who wants nothing more than to curl up as close to me as she can get has to stay alone all night in a metal cage.)

But I think she’s going to make it. Her temper tantrum (that’s what the vet tech called it!) showed a clear increase in energy. She can’t be getting worse if she’s getting better, right?

If she survives, and I’m saying she will — she must — she’ll have survived a dose of Rymadil about 420 times the dose should she have got. That takes a pretty tough little dog.

And maybe some kind of a miracle.

This entry was posted in Animal friends. Bookmark the permalink.

6 responses to “Sadie at home”